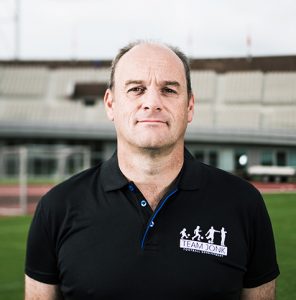 Since 1999, Bob has worked for the Belgian Football Association, both as a national youth team coach for the U15, U16 and U17 and as the technical coordinator for coaching education, elite player development and grassroots football. Bob is one of the visionaries behind and co-editor of the Belgian vision on youth development that kicked off in the year 2000 and has revolutionized Belgian football since. Through structural reform and by creating a healthy and sustainable youth football ecosystem, Belgium as a football nation has steadily but impressively progressed, reaching the Nr 1 position on the FIFA ranking in 2015. Individual development, 1v1 skills, creativity, reality based learning, age appropriate learning and small sided games are keystones in this vision. In addition, Bob inspired the start of the national “future” youth teams in 2008, which are exclusive reserved for talented but late mature players. Bob has found – and still finds – his inspiration from the Netherlands, Germany and Spain, where Johan Cruyff’s ideas on youth development and football playing style have been a guiding thread and strongly influential. In 2007 and 2015, as coach of the Belgian U17 team, Bob reached the semi-finals and consequently participated in the World Cup U17 in both South Korea (2007) and Chile (2015). In Chile, his team obtained the bronze medal, which was the best result ever for a Belgian national youth team. Bob holds a master degree in Physical Education, as well as the UEFA Pro License in Football. He is a former goalkeeper and played for SV Waregem (Belgian professional level) and several Belgian amateur clubs. Bob is the author of a book on goalkeeping (1993) and has worked as a FIFA-instructor on goalkeeping coaching since 2010.