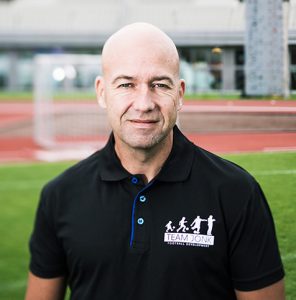 Help young talented football players to become worldclass performers who give pleasure, excitement and unforgettable moments to football lovers all over the world

As Technical Manager Skills Phase (July 2011-June 2015), Michel reformed the philosophy and training methodology for the age groups U8-U12 at the AFC Ajax Amsterdam academy. Inspired by the ideas of Johan Cruyff, technical skills training was reinstated as the primary focus of the U8-U12 training programme. Combining the main principles of the Coerver method with modern learning styles (‘Coerver 2.0’), the Ajax academy players were challenged to master the ball, dominate the 1v1 situations and, above all, explore and utilize their full creative potential. In addition, Michel brought into practice the slogan of Johan Cruyff and Wim Jonk saying “the culture of street football must be implemented in the academy”. He integrated street football principles into the Skills phase programme, such as more player freedom and responsibility, small-sided games, training on different surfaces, etc. Michel also co-initiated and managed the roll-out of the Plan Cruyff agenda to improve Dutch youth football, by promoting the revival of street soccer (principles) and introducing the “Twin Games” concept as a solution for the youngest age groups to play on much smaller pitches. Starting as a pilot project in Amsterdam, this concept has quickly spread across the Netherlands. After two years of pilot competitions initially restricted to Dutch professional clubs, the concept has now been officially adopted by the Royal Dutch Football Association (KNVB) as an integral part of its Masterplan to reform Dutch (youth) football. Starting in the 2017-2018 season, all Dutch players aged 6 to 12 will play on significantly smaller pitches, including the grassroots level. Between July and December 2015, Michel implemented his knowledge in the total Ajax academy, working for the Talent Development department, with football methodology as his main focus. In December 2015, after a period of ongoing disagreement with the Ajax board of directors about the lack of implementation of the Plan Cruyff in other parts of the club, the involvement of Head of Academy Wim Jonk and Johan Cruyff with Ajax came to an end. As a result, Michel decided to leave Ajax, lacking the belief that the Plan Cruyff would be fully implemented without Johan Cruyff and Wim Jonk. Prior to Ajax, Michel was a technical skills trainer for NAC Breda and FC Utrecht (The Netherlands) as well as CSKA Moscow (Russia).