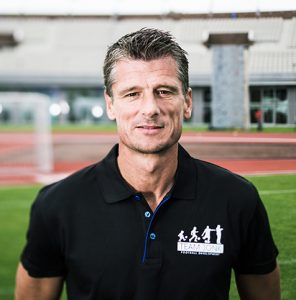 Wim is a former professional football player, 49 times Dutch international and former Head of the Academy at AFC Ajax Amsterdam. A typical midfield architect and master of the passing game, he was known for his skills and excellent vision of the game, as well as his accurate passing and powerful shooting. Starting his career at FC Volendam in 1986, Wim was quickly recruited by Johan Cruyff to join the ranks of Ajax. After winning the national championship, the Dutch national cup and the UEFA Cup (1992) with the Amsterdam giants, he moved to Internazionale, winning the UEFA Cup again in 1994 and scoring the decisive goal in the final. Wim continued his career at PSV Eindhoven, winning one more national championship, the Dutch national cup and three consecutive Supercups. Playing for the Dutch national team, Wim participated in the 1992 European Championship and two consecutive World Championships of 1994 and 1998 (semi finalist). He finished his career as a player at Sheffield Wednesday and retired in 2001 due to injury. Returning to football in 2004, Wim took up the role as board member for technical affairs at FC Volendam. In 2008, Wim returned to Ajax Amsterdam to work as an individual skills trainer. Seeing the potential for improvement and given the challenges of modern football, he concluded that the once famed academy was in need for an upgrade, in terms of quality but also in terms of its philosophy. Consequently, Wim teamed up with Johan Cruyff and Ruben Jongkind in 2010 to write the “Plan Cruyff”. One of the main pillars of this visionary plan was the reform of the Ajax youth academy, based on an individual approach in talent development. After a period of great turbulence, often referred to as “the velvet revolution”, the club finally adopted the Plan Cruyff as its new policy in 2011. Wim was appointed Head of the Academy and a member of the newly instituted Technical Heart in charge of football policymaking. Between 2012 and December 2015, he implemented the Plan Cruyff, and by doing so revolutionized the academy and the club as a whole. In concert with Head of Talent Development Ruben Jongkind, Wim fundamentally reformed the Ajax academy structure and its culture, introducing a new philosophy that marked the player and his development as the indisputable focal point of the academy, in all aspects of its organisation and processes. In addition, Wim coached the Ajax U19 team towards national title success and showcased an impressive UEFA Youth League campaign with spectacular attacking football. In December 2015, after a period of ongoing disagreement with the Ajax board of directors about the lack of implementation of the Plan Cruyff in other parts of the club, the involvement of Wim and Johan Cruyff with Ajax came to an end. As a coach, Wim is a holder of the UEFA Pro License.